What the client needed

This is part of a climate change campaign that has gathered support from people around Scotland to send a message to leaders attending COP26 in Glasgow.

Climate Scotland has collected over 7,000 voices from across the nation, to show that the people of Scotland want meaningful action to protect the things they love, and create a better future for people everywhere.

Nine new mural artworks have been created to depict the messages of the people of Scotland gathered so far, and are on display at the Glasgow Botanic Gardens during COP26.

The UN climate summit COP26 is a major opportunity to re-energise efforts to tackle the climate emergency.

Through this campaign, everyone in Scotland has the opportunity to show how much they care about the climate and nature emergencies. The messages gathered online have been shared in the COP26 Green Zone and at the Scottish Government space at The Lighthouse, Glasgow.

My part of the project

I was thrilled to bring Kaitlin Mechan  and Indrė Šimkutė on board to work on this Climate Scotland and RSPB Scotland campaign.

I managed the project as the contact point for the artists and the client. I delivered the project within the agreed tight timeframe project for both the clients and artists. Each artist, including myself, created three mini murals on wooden boards. As a team, we agreed on the colour palette and discussed ideas. Each artist then created their own sketches which I collected on a presentation document for the client. Once we got the green light for the projects, we each sourced our paints and began painting.

I believe that murals start conversations, and chats about topics we care about, often reveal that other people also care. I’m proud of the artworks we have created and can’t wait to share them with the public. 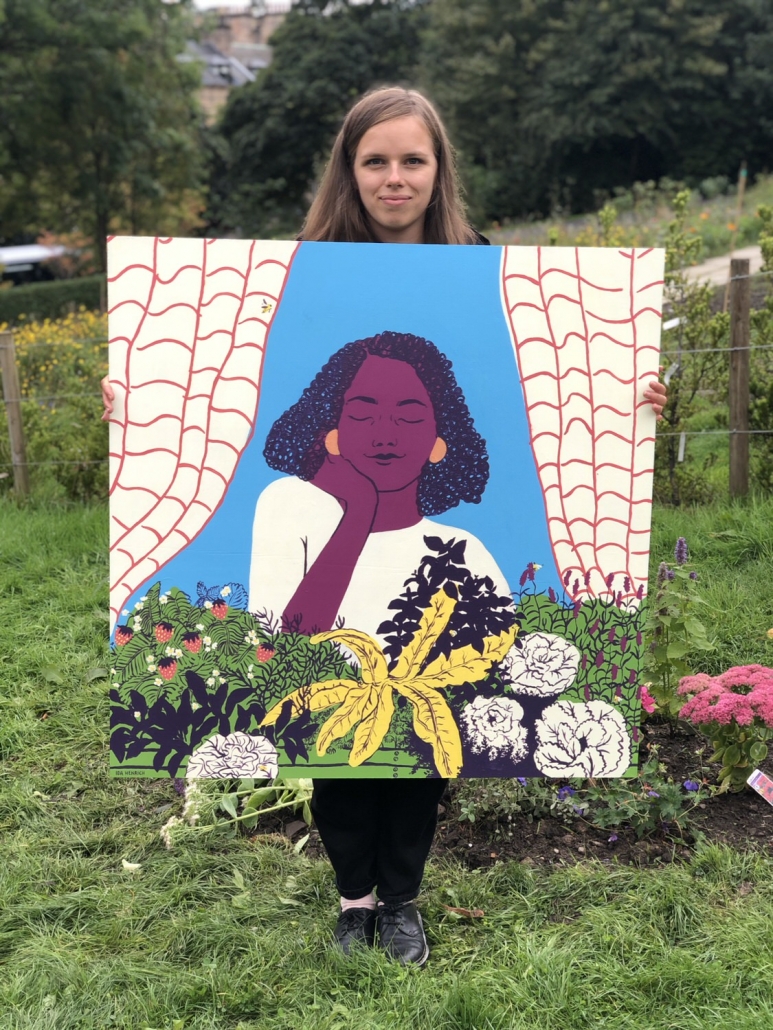 The health and wellbeing mural is inspired by how nature, and my small garden, makes me feel. I explored the means by which people find small ways to bring nature into their homes. Window boxes in flats without gardens and other innovative ideas are great ways to make gardening accessible.

My Solidarity with global neighbours artwork, explores ways in which people around the world can work together for a shared planet and ecosystem which works for all. The arms embrace the planet and highlight local plant life, endangered species, fishing, coral and renewable energy. 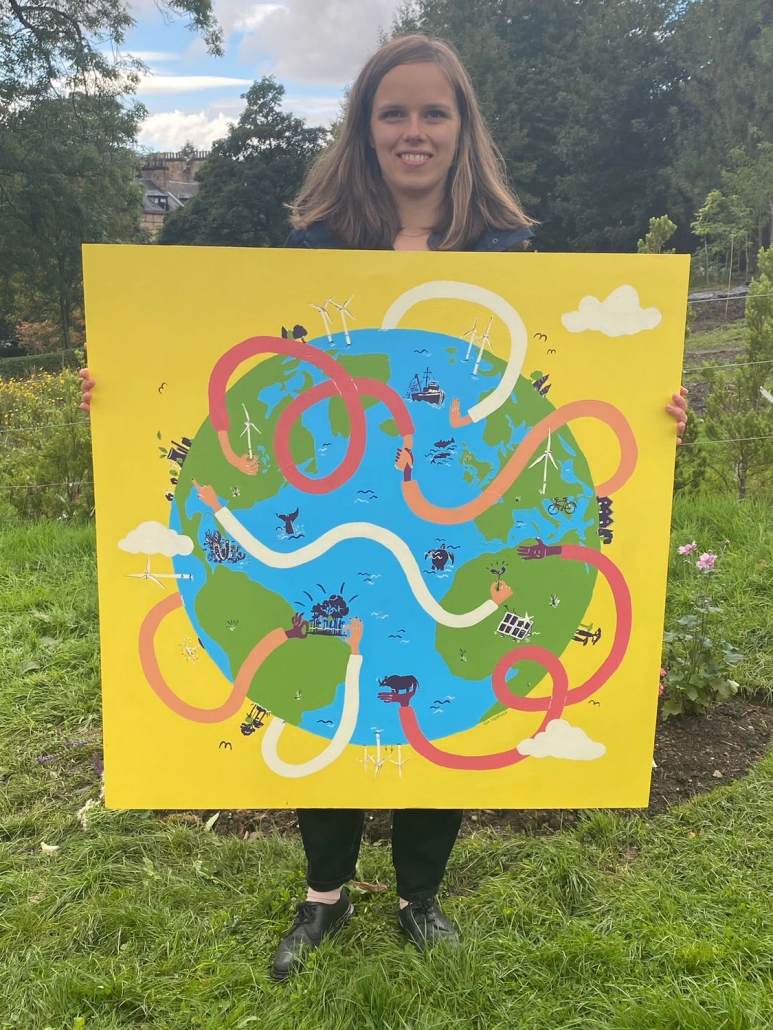 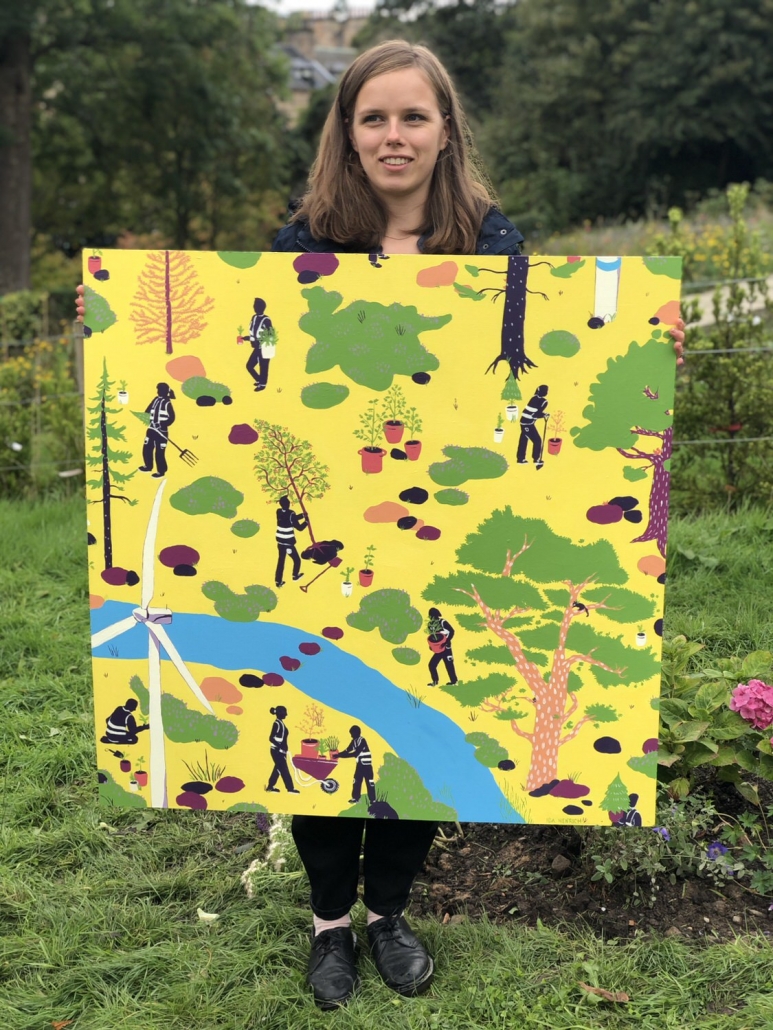 Greener, fairer livelihoods, was inspired by the tapestries at Stirling Castle. I liked the idea of creating a modern design showing people working together to rebuild a diverse Scottish woodland.

The wildlife and nature illustration celebrates some of the beautiful and majestic wildlife that can be found in Scotland featuring endangered species such as the natterjack toad and the red squirrel. 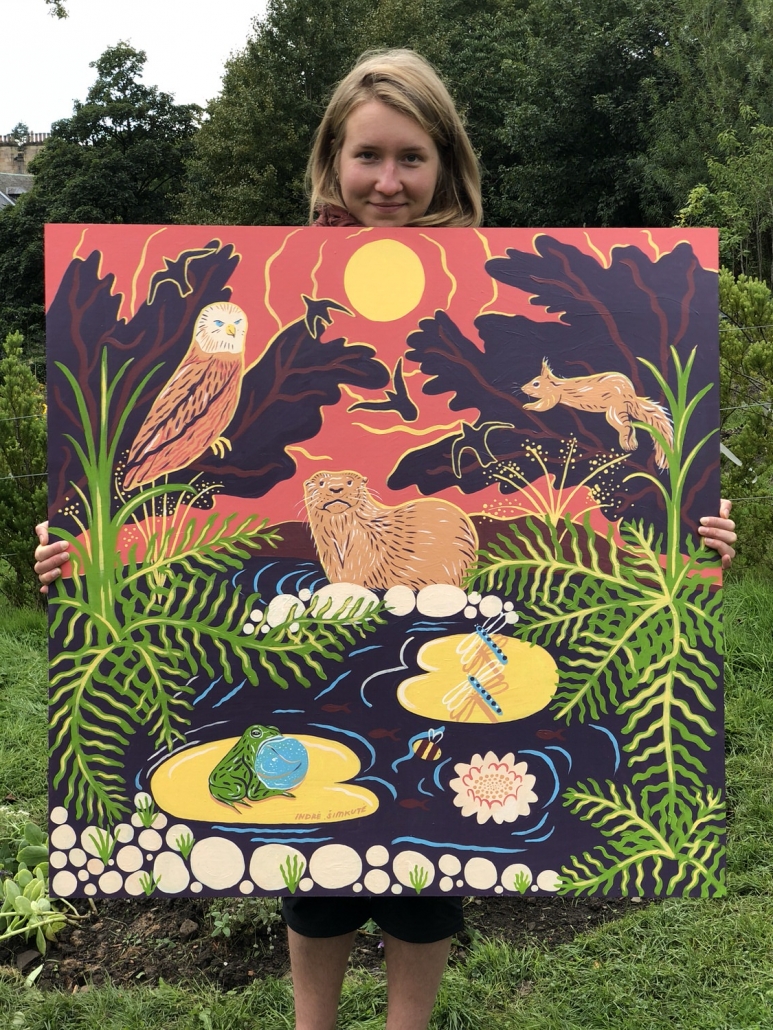 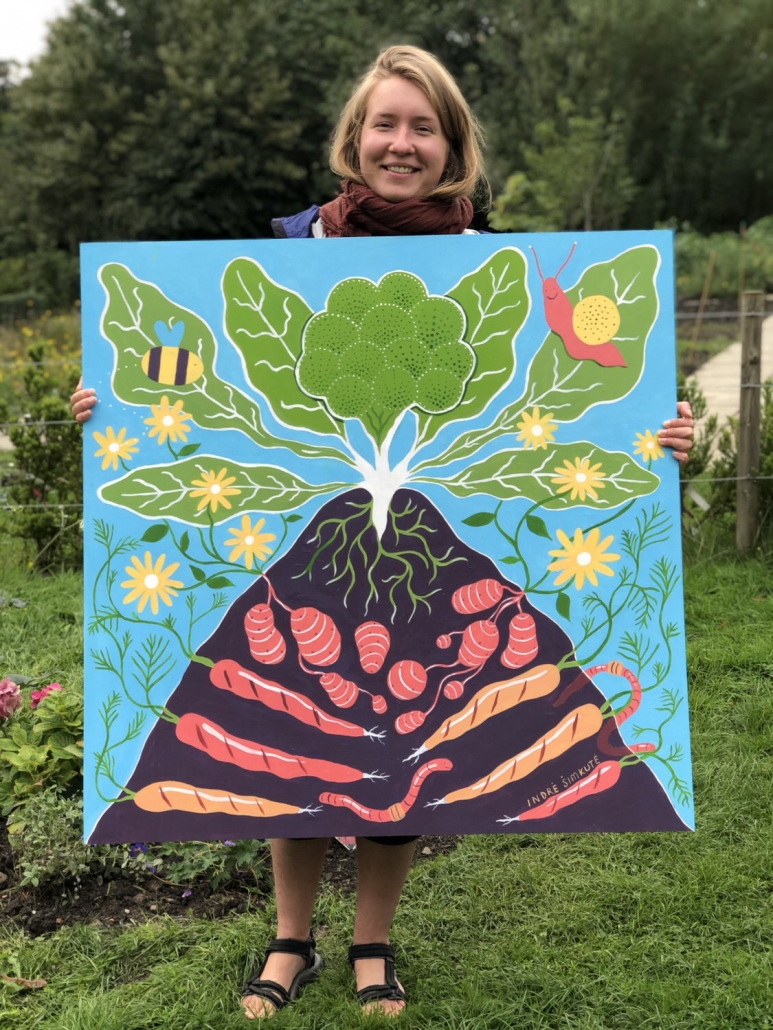 The sustainable food system mural depicts a mound of soil planted with broccoli, potatoes, carrots and Jerusalem artichoke. Inspired by the local community garden at the Bowling Green in Pollokshields where I volunteer, which I think is a brilliant example of this. An organic, no dig, permaculture style approach to growing food not only reduces greenhouse emissions but also increases biodiversity which plays a vital role in making ecosystems more resilient to climate change.

The future generations piece joyfully depicts a grandmother taking her 2 grandchildren out to see the Scottish hills, there is a loch running through the landscape and hills are dotted with flowers. It is a reminder that we must do everything in our power to protect these beautiful places to ensure that future generations are able to enjoy them too. 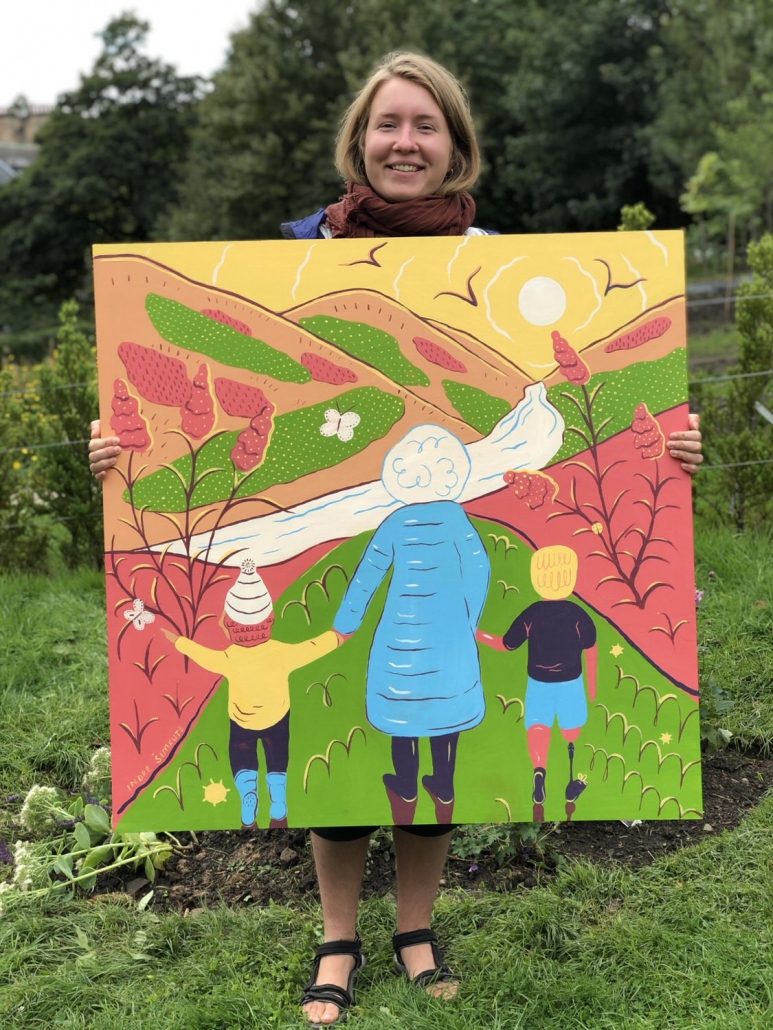 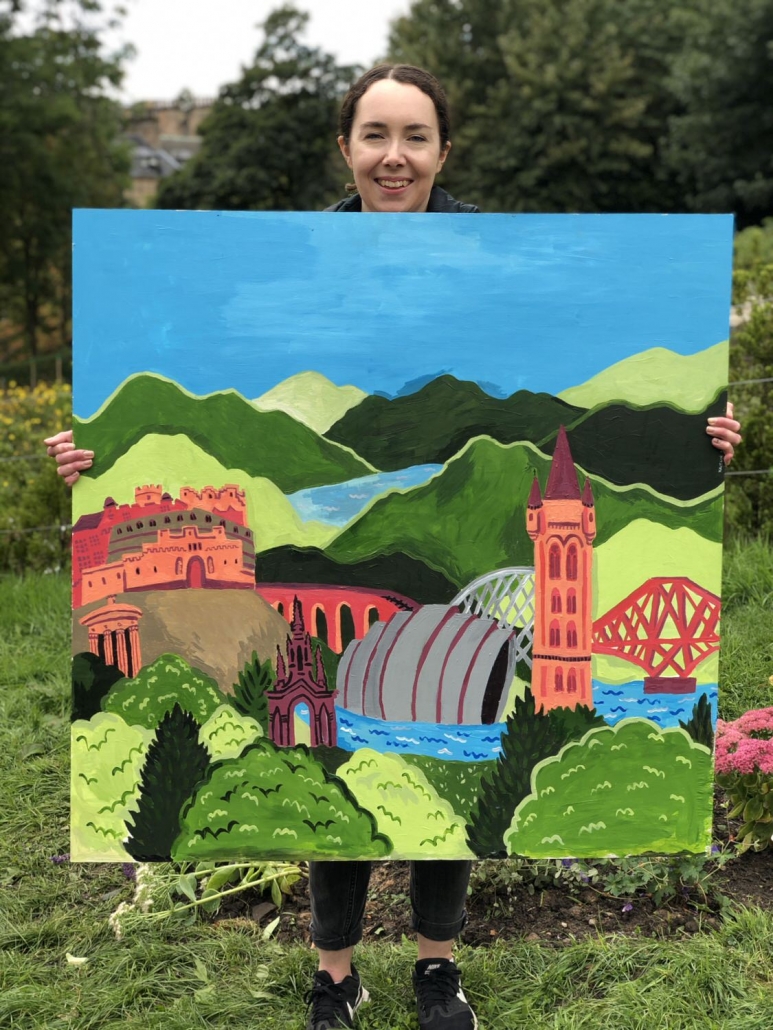 The beautiful places mural captures many of the famous landmarks around Scotland set on a backdrop of the hills, lochs and mountain ranges that make this country so beautiful.

The Protecting the world’s resources artwork aims to emphasis the importance of educating young people and future generations on how to care for our planet and protect its precious resources for the greater good of all. 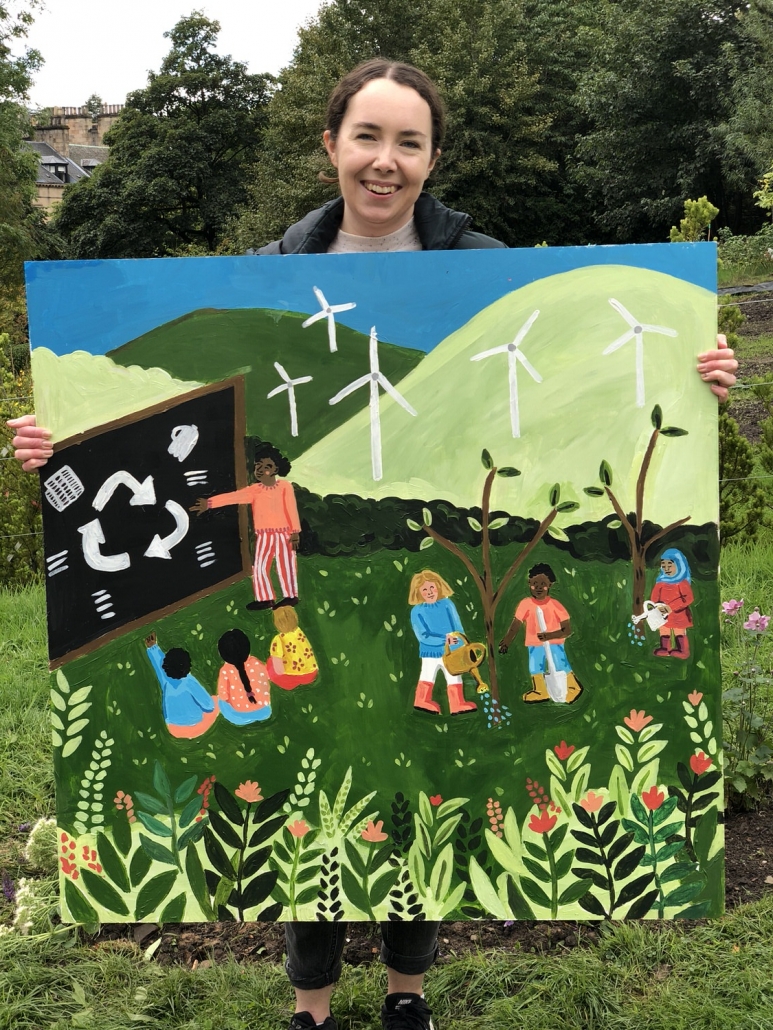 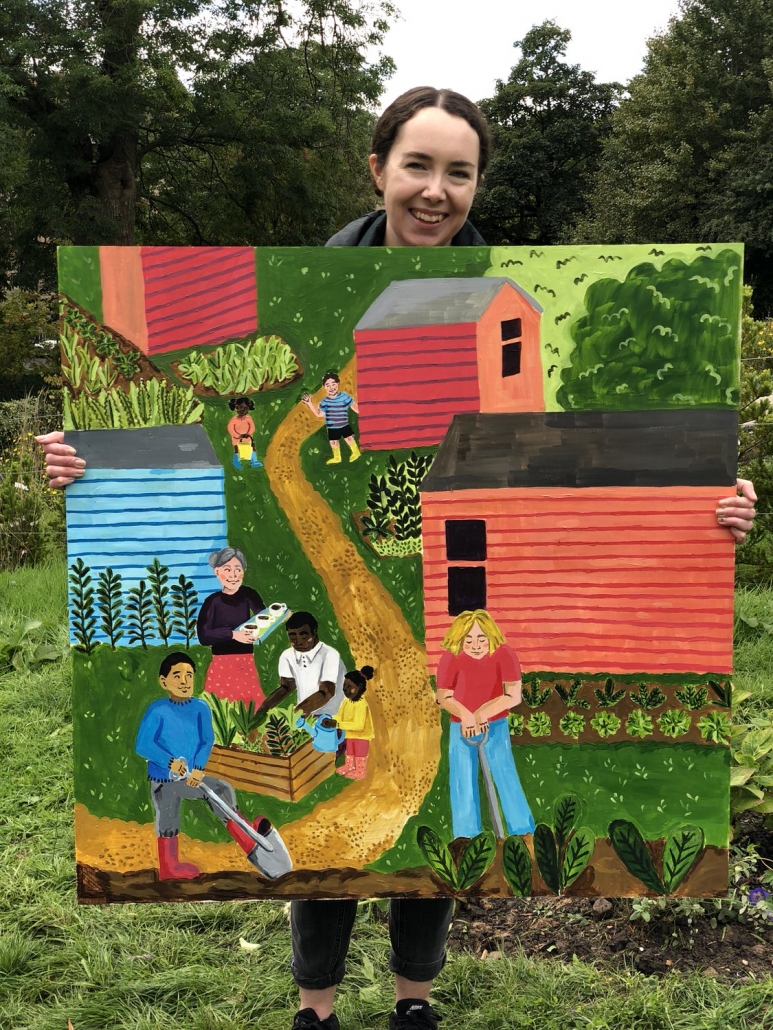 This artwork aims to capture the ways in which we can work together to build strong communities with those around us. In doing so we can find ways to enjoy nature while making sustainability a part of our everyday lives.

We may request cookies to be set on your device. We use cookies to let us know when you visit our websites, how you interact with us, to enrich your user experience, and to customize your relationship with our website.

Click on the different category headings to find out more. You can also change some of your preferences. Note that blocking some types of cookies may impact your experience on our websites and the services we are able to offer.

These cookies are strictly necessary to provide you with services available through our website and to use some of its features.

Because these cookies are strictly necessary to deliver the website, you cannot refuse them without impacting how our site functions. You can block or delete them by changing your browser settings and force blocking all cookies on this website.

We also use different external services like Google Webfonts, Google Maps and external Video providers. Since these providers may collect personal data like your IP address we allow you to block them here. Please be aware that this might heavily reduce the functionality and appearance of our site. Changes will take effect once you reload the page.